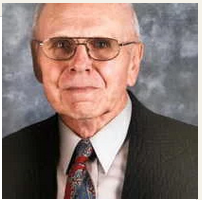 Alfred grew up in Allenville, attended school there and worked on the family farm. He joined the Air Force for the Korean War where he was a weapons mechanic stationed in Korea. Upon returning from the Air Force, he worked on the Mackinac Straits Ferry Boat “The Vacationland” until the Mackinac Bridge opened in 1957. He became a mail carrier for a time- delivering mail from St. Ignace to Cedarville. He met Sherrill McKenzie when he was donating blood – she was the lab technician who drew his blood. On October 4, 1958, they were married. He then worked for McGregor Oil Co. as a mechanic before going to work for MDOT as a snowplow driver and retired as a mechanic in 1992. Alfred was a member of the Allenville Zion Lutheran Church.

Alfred loved hunting deer and any squirrels that messed with his bird feeders. He liked spending time at hunting camp and enjoyed traveling to visit his kids. Mostly he enjoyed being home and his happiest place was in his garage fixing something.

A memorial service will be announced this summer.