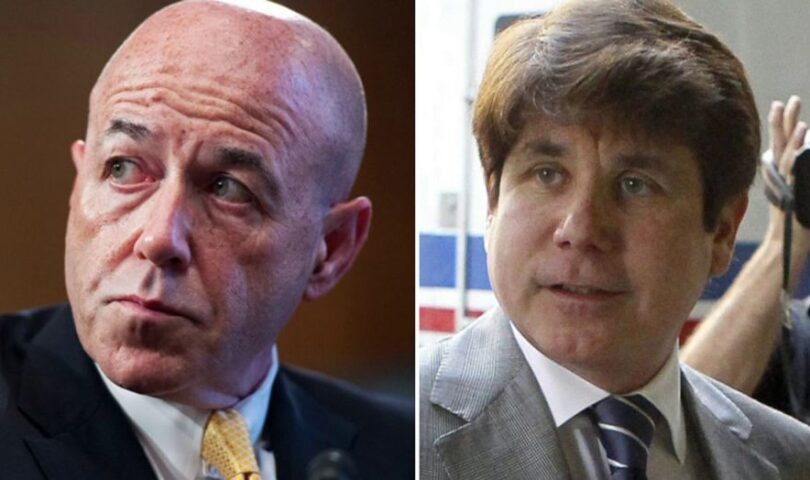 Blagojevich, 63, was sentenced in 2011 to 14 years in federal prison on corruption charges related to his solicitation of bribes in an attempt to “sell” the Senate seat Barack Obama left open after being elected president.

Kerik was sentenced in 2010 to four years in prison after pleading guilty to eight felony charges, including tax fraud.

“He served eight years in jail, a long time,” Trump told reporters at Andrews Air Force Base. “I don’t know him very well. I met him a couple of times. He was on for a short while on the Apprentice some years ago. He seems like a very nice person, I don’t know him.”

Trump said “many people” thought the sentence was unfair. “He’ll be able to go back home to his family,” he added.

Blagojevich, a Democrat, has been serving his term at the low-security Federal Correctional Institute in Englewood, Colorado. He’d been a contestant on Trump’s reality TV show “The Celebrity Apprentice” in 2010.

The president said in August of last year that he was “very strongly” considering giving Blagojevich a reprieve.

“I’m thinking about commuting his sentence very strongly,” Trump told reporters aboard Air Force One then. “I think it’s enough — seven years,” he added, referring the amount of time the ex-governor has already served.

“He’s been in jail for seven years, over a phone call where nothing happens … Over a phone call where, you know, he shouldn’t have said what he said, but it was braggadocio, you would say. I would think that there have been many politicians, I’m not one of them, by the way, that have said a lot worse over telephones,” he added.

Prosecutors said Blagojevich and others working for him began “a pattern of racketeering activity” soon after he took office in 2002, using the powers of the governorship in “exchange for financial benefits for themselves and others.”

He was arrested in late 2008 for trying to profit from selling off Obama’s open Senate seat, and was impeached in January 2009 after he refused to resign.

Blagojevich was convicted in Chicago federal court later that year on one of 24 felony counts against him — lying to the FBI about the extent of his involvement in campaign fundraising. Jurors deadlocked on the other counts.

In between his trials, he tried rehabilitate his image and signed up as a contestant on Trump’s reality show “The Celebrity Apprentice” in 2010. He was “fired” after four episodes after bungling a Harry Potter presentation.

Kerik, who was former New York City Mayor Rudy Giuliani’s police commissioner during the Sept. 11, 2001 terror attacks, was sentenced to four years in prison in 2010 for offenses including failure to pay taxes and lying to the White House during his scuttled nomination to be Homeland Security chief.

He tweeted a message of thanks after news of his pardon broke, writing that there “are no words to express my appreciation and gratitude to President Trump.”

In 2018, in the weeks after he pardoned conservative provocateur Dinesh D’Souza, Trump had said he’d been “thinking about” taking the action on behalf of the ex-governor. Trump told reporters in May 2018 that Blagojevich had received a lengthy sentence “for being stupid and saying things that every other politician, you know, that many other politicians say” and “that he was treated unfairly.”

The remarks were likely a reference to what the then-governor was picked up saying on secret federal wiretaps about his authority to appoint someone to Obama’s open Senate seat.

Blagojevich has argued he was a victim of federal prosecutors run amok — a claim Trump himself levied at former special counsel Robert Mueller’s team, which investigated Russian interference in the 2016 election and the president.

“Under the legal arguments that prosecutors used to convict me, all fundraising can be viewed as bribery,” the ex-governor wrote in a 2018 op-ed in The Wall Street Journal that was widely viewed as a personal appeal to Trump for clemency.

Democrats — including Sen. Dick Durbin, D-Ill., and former Attorney General Eric Holder — have said publicly in the past that they’d support efforts by Trump to commute Blagojevich’s sentence.

Trump has issued numerous pardons and commutations since taking office. In addition to the pardons Tuesday for Kerik and DeBartolo Jr. and in 2018 for D’Souza, who pleaded guilty in 2014 to violating campaign finance laws, Trump has pardoned Joe Arpaio, a former Arizona sheriff who is a favorite of immigration hard-liners; I. Lewis “Scooter” Libby, the aide to former Vice President Dick Cheney who was convicted of obstructing justice and lying to authorities during an investigation into the outing of CIA agent Valerie Plame; Kristian Mark Saucier, a Navy sailor who kept classified materials; and Jack Johnson, the African-American boxing legend who was convicted under a law that was used as a deterrent to interracial dating.

Trump also commuted the sentence of Alice Marie Johnson, who was serving life in prison on drug charges, after reality star Kim Kardashian West lobbied the president in an Oval Office meeting to intervene her behalf.

In addition, Trump has hinted at pardoning lifestyle and home merchandise mogul Martha Stewart, who was convicted in 2004 on charges related to insider stock trading and was sentenced to five months in prison.