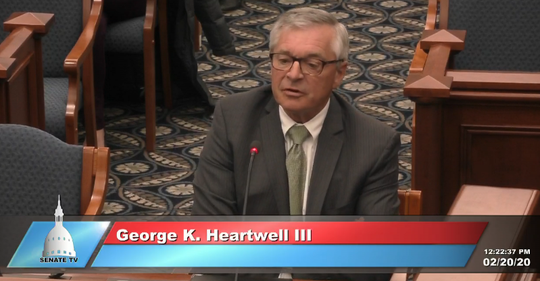 Lansing — Michigan Gov. Gretchen Whitmer’s appointee to a state commission that regulates hunting and fishing said Thursday that he made a “personal decision” decades ago that “killing things was not for me.”

George Heartwell, the former mayor of Grand Rapids, made the comments during a Michigan Senate Advice and Consent Committee hearing where senators vetted him for his new potential position as chairman of the Natural Resources Commission.

While Heartwell said hunting is part of the state’s heritage and he believes in U.S. citizens’ right to bear arms, Republican senators focused multiple questions on the fact that he hasn’t hunted for about 35 years.

“It was a personal decision,” Heartwell told the committee. “It was not intended, nor would I want it to be read today, as a judgment on others who hunt. I support hunting. But it wasn’t right for me.

After deciding to go to theological seminary in his 30s, Heartwell said he made a “sudden” decision to stop hunting and he gave his firearms to a business partner.

Heartwell’s appointment to the Natural Resources Commission, which has the power to designate game species, has been contentious since Whitmer announced it on Feb. 7. The Natural Rifle Association has criticized Heartwell, who supported banning guns from city buildings when he was mayor of Grand Rapids.

Whitmer spokeswoman Tiffany Brown has said Republicans in the state Senate, which can reject gubernatorial appointees, demanded that she pull back Heartwell’s appointment. Whitmer refused.

Amid the disagreement, the Senate voted last week to block another Whitmer appointee to the Natural Resources Commission, Anna Mitterling. It was the first time the Senate has blocked a gubernatorial appointee in nearly a decade. Democrats said Republicans did it because Whitmer wouldn’t rescind Heartwell’s appointment.

On Thursday, committee senators quizzed Heartwell for nearly two hours. Much of the discussion focused on his views on guns. While others defended Heartwell, Republicans on the panel questioned whether his personal views were right for the commission.

“Do I believe in the Second Amendment? Yes,” Heartwell said during his opening remarks. “It is a right of U.S. citizens to bear arms. Because I choose not to own firearms does not mean I do not respect the rights of others.”

Sen. Jon Bumstead, a Republican from Newaygo, where Heartwell resides, attended the Thursday meeting to speak in favor of Heartwell’s appointment. Bumstead was also the lone Republican to vote against blocking Mitterling.

Bumstead called Heartwell “open minded.” The GOP senator described himself as a lifetime NRA member, but he questioned why the NRA hadn’t reached out to have a conversation with Heartwell before objecting to his appointment.

“I don’t see how the NRA can oppose his appointment if they’ve never put an effort into speaking to George,” Bumstead said.

No one from the NRA spoke at Thursday’s meeting. But Tom Lambert, representing the gun rights group Michigan Open Carry, opposed Heartwell.

Lambert’s criticism focused on Heartwell’s support of banning guns at city buildings in Grand Rapids despite an opinion from then-Attorney General Bill Schuette that guns should be allowed.

“Our society would be better off with more people like Mr. Heartwell. That is a given,” Lambert said.

“We did recognize that it was an unenforceable law,” Heartwell responded. “And yet we left it in place.”

The presence of firearms at public meetings was problematic for the First Amendment rights of others who’d be intimidated by guns being there, the former mayor said.

Nesbitt also asked whether citizens should be concerned that the current chairman of the Natural Resources Commission hasn’t hunted in 35 years.

“I can only tell you that I support hunting in the state of Michigan,” Heartwell replied. “Beyond that, I don’t have a history, a track record, for the past 35 years as proof.”

After the meeting, Sen. Peter Lucido, who chairs the Senate Advice and Consent Committee, declined to say whether he supports or opposes Heartwell’s appointment. But Lucido said the fact that Heartwell hasn’t hunted in 35 years is “going to weigh in on a lot of things.”

The Senate has until April 7 to vote to block Heartwell’s appointment, otherwise it takes effect.