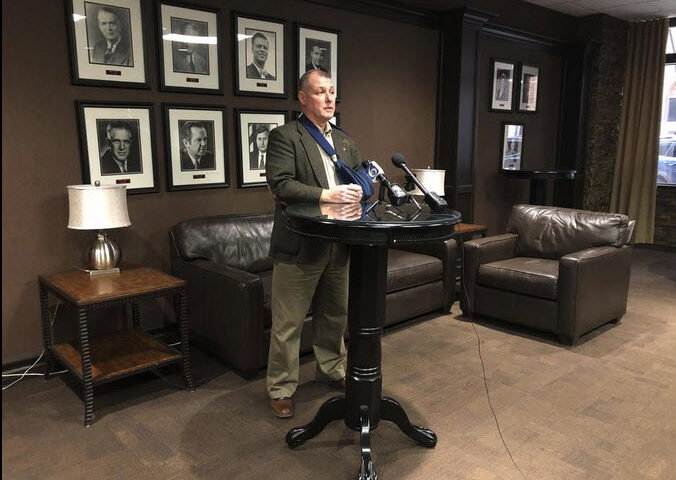 LANSING — State lawmakers and a gun rights group on Tuesday called for changes to Michigan’s terrorism law after a Lake Superior State University student was charged for posting a photo of his rifle on social media and saying it would make “snowflakes melt.”

Lucas Gerhard, 20, faces the charge of making a terrorist threat over an incident that occurred in August. The maximum sentence for a conviction on that charge is 20 years in prison.

The night before returning to the school for his junior year, Gerhard sent a photo of his newly purchased AR-15 rifle to a group of friends on Snapchat. The text said: “Takin this bad boy up, this outta make the snowflakes melt, aye? And I mean snowflakes as in snow.”

Republican state Rep. John Reilly of Oakland Township in suburban Detroit is sponsoring new legislation to redefine the crime of making a terrorist threat or making a false report of terrorism.

“I never thought our society was so fragile that someone’s life could be ruined for telling a joke among friends,” said Reilly. “It’s a travesty that the county prosecutor charged him with any crime, for something that is clearly and undeniably protected speech under the First Amendment.”

He said Michigan’s definition contains no requirement that any particular target exist nor any “reasonable person” standard, exposing people to charges for telling what Reilly called harmless jokes.

Reilly was joined by Gerhard’s father, Mark — a constituent — GOP Rep. Beau LaFave of Iron Mountain and Michigan Open Carry President Tom Lambert at a Tuesday afternoon news conference near the Capitol. Lucas Gerhard attended but did not speak per the advice of his lawyer since his case is pending. He spent 83 days in jail before being released on bond.

The Chippewa County prosecutor could not be reached to comment on criticism lodged against his office.

According to court documents, two Lake Superior State students notified the campus’ public safety department of the Aug. 22 Snapchat post, and the matter was referred to Sault Ste. Marie police. Public safety officers said they had numerous prior incidents and contacts with Gerhard, including when an anonymous tip was made to a downstate law enforcement warning that he was a potential school shooter.

The university students told police Gerhard had “extreme political views” and they worried about students’ safety if he brought the gun to school.

Weapons are permitted on campus but must be registered and stored in the public safety department upon arrival on campus. Gerhard checked in his weapon and 240 rounds of ammunition for safe keeping on Aug. 23, the day he arrived at the Upper Peninsula school.

Gerhard told an officer that the term “snowflake” referred to people whose political ideology is liberal or Democratic, and making the snowflakes melt meant their “minds melting” when they found out he had brought an AR-15 to school. He said he did not want to harm anyone or himself, and wanted to be a police officer to protect people.

He was arrested the following day.

Mark Gerhard said one of his son’s friends had shown the post to another student with whom Lucas had had some “political arguments.” The woman “took offense” and reported it, he said.

“I was in disbelief. I couldn’t believe the prosecutor had actually decided to press charges,” he said, adding that if school officials thought his son was a threat, they would have asked police to intercept him earlier. He described Lucas as a conservative on a liberal campus who defends his beliefs, is “very vocal about” it but “never vindictive about anything, never antagonistic.”

Gerhard’s trial, scheduled for March, may be postponed because he has a new attorney.