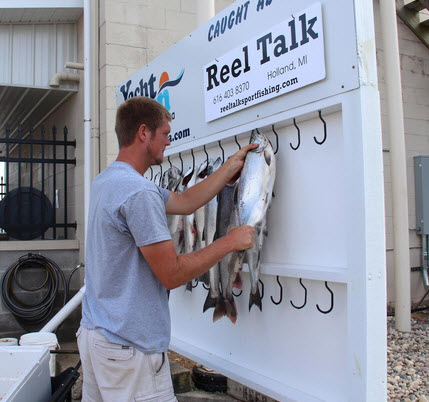 LANSING — Recently introduced bills in the Legislature are in direct opposition about the controversial issue of allowing commercial catching of game fish and are causing conflict between commercial fishers and sport anglers.

Recreational anglers like things the way they are, while the industry is pushing for the right to catch and sell game fish like walleye, perch and trout.

A trio of bills in the House would continue the ban on commercial game fish harvest that started in the 1960s. The sponsors include Reps. Jim Lilly, R-Park Township, and Jack O’Malley, R-Lake Ann.

The commercial fishing industry strongly opposes those bills, arguing that they would limit fishers’ ability to support themselves.

“There are not game fish versus commercial fish — there are fish,” said Amber Mae Petersen, the secretary-treasurer of the Michigan Fish Producers Association, an industry group.

Petersen also runs the Fish Monger’s Wife, a market in Muskegon, and her husband is a commercial fisher.

“All these bills do is eliminate commercial fishing,” Petersen said. “If you want to buy Michigan-caught fish, you can’t unless you want whitefish. If you want any other fish, buy a pole and go catch it yourself.”

The bills have support from conservation groups and sport fishing organizations like the Michigan United Conservation Clubs (MUCC).

“Our goal is to support and protect sport fishers and keep game fish out of the hands of professional anglers,” said Nick Green, the MUCC public information officer. “We are the center of conservation efforts, and commercial fishing pales in comparison to what recreational angler value is.”

They support dramatically different legislation that would let them catch game species.

Their bills take an alternate approach towards regulating the industry.

“The fish belong to the citizens of the state, and they have since before Michigan was a state,” Peterson said. “It was in the ’60s when we decided to create a sport fishing industry and started limiting how those fish could be accessed.”

The industry-backed bills would legalize commercial catch of game fish subject to a yearly quota determined by analysis of fish population data. That approach would allow the commercial capture of 10% to 20% of the total population.

“If only 10% is set aside for local fishermen to catch and sell, that still leaves 90% for sport fishermen,” she said.

The economic implications of continuing the restrictions outweigh the loss of revenue for commercial fishers, according to Dennis Eade, the chair of the Michigan Steelhead and Salmon Fishermen’s Association.

“Tourism is one of the biggest industries in the state, and recreational fishing brings over 300,000 out-of-state fishermen to fish the rivers, lakes and streams in Michigan,” Eade said. “Recreational fishing represents $4.2 billion for Michigan alone. Commercial fishing is $5 million, 13 families that actively fish and only 51 licenses that are available.”

Eade says that sport fishers would be hurt by commercial game fishing.

“Game fish are being stocked and raised in Michigan, and all these fish costs are being paid by license costs for sports fisherman,” Eade said. “Commercial fishermen aren’t contributing anything besides the cost of their license, and there are only 13 of them.”

“We believe it’s not fair for them to take a large portion of game fish when they’re not paying for the costs to keep this resource,” he said.

Petersen said the approach that sports fishing groups favor would be a huge blow to commercial anglers.

“It’s a slow bleed to commercial fishermen. It doesn’t even give us the dignity of a quick death,” Petersen said. “Eventually we will no longer be able to survive.”

In addition to the economic impact, recreational fishers say they worry about the impact of commercial fishing on conservation efforts.

Lake trout in particular have been badly affected by invasive species and overfishing, according to Bryan Burroughs, the executive director of Michigan Trout Unlimited in DeWitt.

“Lake trout were basically wiped out of Lake Michigan and Huron, and they were brought back by a federal program,” Burroughs said. “After about 50 years of trying to restore lake trout, we’re seeing the first positive signs of some success, but they are not yet a self-sustaining population.”

According to Burroughs, opening up game fish to commercial fishers would take that resource away from sport anglers.

“While we’ve been restoring the trout population, recreational anglers have been allowed to have some access, but the bag limit is very low,” Burroughs said. “If commercial fishermen enter the equation, they are going to be allocated a certain number.”

“You can’t allow commercial fishermen to take a percentage of that population without limiting sport fishermen. It’s putting a demand where there isn’t a supply,” he said.

“We’re waiting to see what the House bills do,” Petersen said. “We are a small grassroots industry, so we have to take and divide people where we best can.”

The bills are pending in committees.