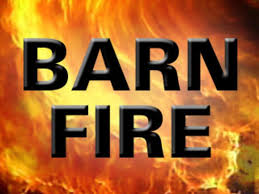 (9and10News) – An early morning fire destroyed a barn that housed dozens of hogs.

The owners say the fire started just after 5 a.m. on Friday South of Pickford on East M-48.

Four fire departments responded but were unable to save the hogs or barn.

They cleared the scene just after 10 a.m.

The farm is owned by fifth generation farmers.

The barn had 120 hogs in it and most were going to be used to help out the young 4-H members in the upcoming fair season.

“They show them at the Kinross Fair…the local kids.  A lot of them were going to the Chippewa County Fair, the Norway Fair on the Western End, some were even going down by Flint and Petoskey,” said J.D. Bishop.

The Bishops do have insurance.

They hope to have some pigs available for the upcoming fair season.