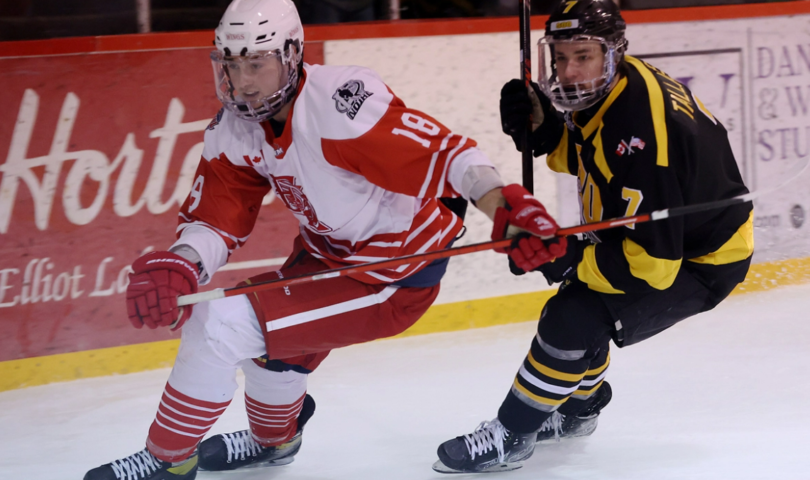 ELLIOT LAKE, Ont. – The Soo Eagles answered back from a two-goal third period deficit and eventually went on to defeat the Elliot Lake Red Wings 5-4 in a shootout in a Northern Ontario Junior Hockey League encounter Tuesday night at Centennial Arena.

The hometown Red Wings began the night’s scoring 13 minutes into the proceedings when Thomas Dimoulas lifted in a back hand from between the hash marks that eluded Sault Ste. Marie goalkeeper Logan Raffaele for his 13th tally of the campaign.

Connecting with an equalizer prior to the first intermission, Chase Tallaire tied it for the Eagles at 17:39, moments after an Elliot Lake shorthanded breakaway was thwarted when Sam Noad’s stick snapped in half just as he was taking a shot.

Then countering, Tallaire came off the side boards and tucked one in from the right of Red Wings’ netminder Cameron Smith.

Action in the second stanza saw Elliot Lake retake the lead at 14:20 of the session, while skating four aside, as Ethan Mercer had a couple of cracks in front before eventually stuffing one by Raffaele.

Adding another with 75 seconds left in the period, the home side darted out in transition on a two-on-one and saw Dimoulas supply his second of the night as he controlled an Adam Matar feed into the slot and snapped in his team-leading 14th of the season.

Storming back in the first half of the third, the Eagles connected twice in a 50-second span to knot the affair at 3-3.

Kenny Belanger Jr., got his club’s second of the evening off a nifty deflection to give him goals in six straight outings, in which he has scored nine times during his impressive run.

The Eagles then drew level moments later with Zachary Briskey spinning and sliding a low shot under Smith at 7:14.

A few shifts later, the Soo went in front on Jack Mortson’s team-leading 20th of the season as he whipped in the go-ahead marker from the slot after Smith got caught out of position.

Coming back to force overtime late in regulation, with their goaltender out for an extra attacker, the Red Wings got a break as Cameron Dial put a play towards the net that clipped off a Soo player and got by Raffaele.

The five-minute OT was scoreless and thus sent the match-up to extra attempts to decide the outcome.

There, the first five chances went without a goal, which set the tone for Tallaire to skate in on his opportunity, where he made a couple of quick dekes before snapping in the decider into the lower right corner to end it.