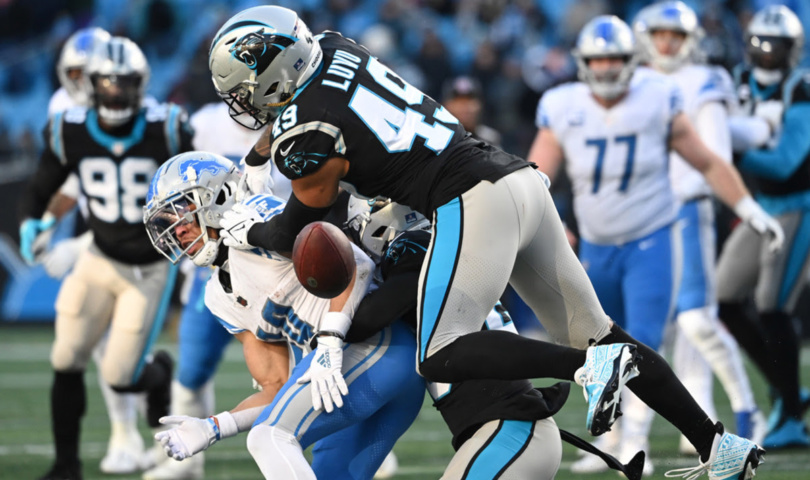 On Saturday against the Carolina Panthers, the Lions were all the above in their biggest game yet of the 2022 campaign.

It was an unfortunate return to the lackluster brand of football that Detroit displayed during its 1-6 start to the season, specifically on the defensive side of the football.

Prior to the Week 16 contest, the Lions’ defense was beginning to show signs of turning the corner.

In fact, from Weeks 13-15, Detroit defensive coordinator Aaron Glenn’s unit had limited each of its opponents to under 100 yards rushing.

But, then Saturday happened, and boy, was it bad from the start.

On the Panthers’ very first play from scrimmage, Carolina second-year back Chuba Hubbard took a carry from quarterback Sam Darnold, and gained 30 yards on it before even being touched.

The Panthers gashed the Lions on the ground all afternoon, to the tune of 320 yards. It was nearly double the amount of rushing yards allowed by Detroit in its previous three games combined (167).

It was a pathetic performance from a Lions team which had previously won six of its last seven games. And, after the Week 16 tilt, Detroit head coach Dan Campbell took full responsibility for the lack of effort shown by his team.

“They got after us pretty good, man,” Campbell told reporters after the loss. “That’s a hard pill to swallow there. You say things, but ultimately, when you play that way, it falls on me. I didn’t have them ready to go. And, that wasn’t good enough.

“That was a hungry team we played, and we didn’t look as hungry as they did. That’s the bottom line.”

Campbell & Co. couldn’t tackle a soul on Saturday, recording 13 missed tackles (per Pro Football Focus). And, along the way, the Lions permitted 570 total yards of offense, the most yards allowed by Campbell’s team in a single game this season.

“Everything was very leaky, and we got gutted on explosive runs, which hasn’t happened in weeks,” Campbell told 97.1 The Ticket’s TJ Lang after Saturday’s defeat. “And look, they got after us. That’s the hard thing about this. We got our ass kicked. And, that’s tough. It’s one thing — well, mentally, we missed on this. No, we just got beat up, and that’s tough.”

Campbell’s right: Detroit did get its “ass kicked” against the Panthers.

Now, it’s back to the drawing board for Campbell and his coaching staff, and time for the team to regroup as it prepares for the final two weeks of the regular season.

On a positive note, in the other Week 16 slate of games, the majority of teams the Lions needed to win did come through with victories (i.e. the 49ers against the Commanders and the Chiefs against the Seahawks). However, with just a 24 percent chance of qualifying for the postseason now (according to FiveThirtyEight), Detroit has an uphill battle ahead of itself.

And, heading into these last two weeks, one thing is certain: If the Lions don’t clean up their issues on defense, you can say goodbye to their hopes of making the playoffs in 2022.