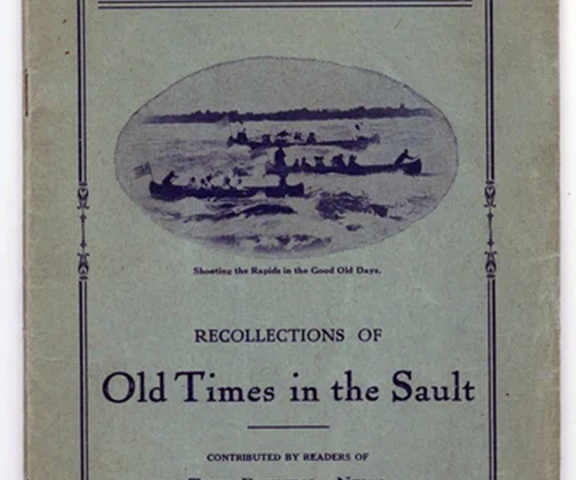 The Sault Evening News put together a booklet of recollections by readers of the newspaper back in 1923. I will be sharing some of these from time to time. I did take the liberty to correct some of the grammar to make it easier for you to read. I hope you enjoy reading these as much as I have.

I remember when our merchants laid sufficient supplies in the fall to last until navigation opened the following spring. Those were the days before staging or railway trains. The spring of 1874 found our stores with only flour and salt pork and not much at that. I remember in particular the day of Theophile Trempe’s funeral. Everybody attended funerals in those days. We were returning when we heard the whistle of the first boat of the season, the Annie L. Craig. In those days boats had traders on board. H. L. Holmes sold his entire stock of ham, eggs, vegetables, and fruit to the villagers, nearly every family purchasing three or four basketsful. There was some dinner that day. – (Mrs. R, J. McKeone, 672 Bingham Avenue)

The summer that the Weitzel lock was finished, I was working with Abe Mitchell finishing the excavation work. Barney Doyle and James Ryan were driving a team hauling boxes of dirt and boulders to the derrick. Lot Jenny had a gang of carpenters building the lock wall. One day when the engineer of the derrick was lowering an empty dirt box into the pit the box knocked a timber off the top of the wall and killed a man, by the name of Lane. When the work was dragging at times, we used to swap yarns, and believe me Jimmy Ryan sure could spin some yarn. The rest of the gang could also tell some pretty good jokes, but we all had to take off our hats to Jimmy. – (A. Washburn, Brimley MI)

A unique party was given by Mrs. P.M. Church and Mr. E.S. Wheeler. A special train was arranged to take the guests out about 10 miles into the woods. There the party enjoyed several hours snowshoeing about until they tired. Returning to the car the party proceeded back to the Sault. On arriving there, we had dinner at the Belvidere on Ashmun Street, south of Spruce Street. The party was in their picturesque costumes and much merriment was had at dinner. I especially remember the lightness and grace with which Mrs. John Colwell danced in spite of her heavy blanket costume and mocassins. – (Mrs. L.C. Sabin, Mission Road)

I used to come to the Soo from McCarron for a haircut and shave. The barbers gave just as good a shave and haircut then, as now. Chippewa County was always a good place to live. – (R.H. Campbell, 916 Easterday Avenue)

I remember when the first boat came up to the Sault on May 5, 1835. It was the steamer Benerolt. Captain Brown was in command. The boat came through the Canadian channel to the north pier and got behind the ice at the Weitzel lock. It moved slowly through the ice from there and made a circle and landed at the dock, while people were still walking the ice to the Canadian Sault. The steamer had a small round pilothouse and the captain stood on top of it. He was so tall it looked like two masts from where we stood. – (John Young, Endress Block)

Early in the 1870s when the only orchestra came from the frog ponds, the second canal was under construction and millions of frogs lived there. One night in June a Canadian passenger boat was in the old State Lock. It was a side-wheeler called the Cumberland. A passenger stepped off and asked my brother what great jubilee was going on. My brother said, “it is our great American band.” The stranger said, “where is the bandmaster” and my brother said,” I guess it must be that green frog sitting and piping knee-deep, knee-deep. – (Mrs. Benjamin McKerchie, 302 Easterday Avenue)

On May 14, 1881, I arrived in the Soo with my family, household, and farm equipment, on the steamer Quebec. We landed at the Government Pier and unloaded. I had sheep, hogs, cattle, and horses. While I was busy with these, my wife thought she would go uptown and purchase some things for the children. She looked around and saw a few buildings along Water Street. She came back to me and asked if the town was back over the hill. Where Ashmun Street is now, there was a plank walk from Portage to Water Street. It was called Plank Alley. There were scarcely any buildings between Water Street and the present site of the City Hall, which was at that time a cemetery. The people used to pick strawberries there. I hired Norman Ripley with his little tug Grace and scow to take us down to Conley’s landing two miles below the Charlotte river. When we arrived there, we put the horses overboard, then standing in the water we assembled the farm wagon and loaded up. Then we harnessed the horses and hauled them ashore. There were no docks or landing places there in those days. I remember coming up to the “Soo” with some of my neighbors. We separated in town and each went his way to do his shopping. Toward evening, I started out to round up our little crowd, when to my surprise, I heard that George Sims had been arrested for laughing in front of Prenzlauer’s store. Policeman Williams had arrested him. John White (Daddy) and I went to Mayor Brown and asked if you could arrest a man for laughing. He said, “Yes, but you can’t keep him locked up.” So he gave me a note to Williams. “Daddy White and I went to the jail, (a log cabin on the ground where the Park school now stands.) Policeman Williams opened the door where George lay on a cot. I put my head in the door and said, “George, Come forth.” – (R.H. Campbell, 916 Easterday Avenue)