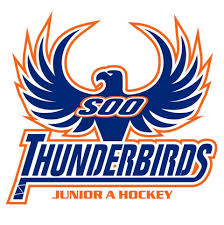 With the series win, the Thunderbirds will now move on to represent the NOJHL at the Centennial Cup, presented by Tim Hortons, May 19-29, in Estevan, Sask.

The opening 10 minutes of the first period saw each side look to find their legs, with the teams looking to not give anything up.

It opened up from there, with some quality chances on both ends.

Hearst had a number of quality opportunities with a flurry of plays midway through the session as they buzzed around the Sault Ste. Marie net, but could not solve netminder Noah Metivier.

Lumberjacks’ stater Matteo Gennaro was equally as sharp as the clubs hit the intermission both in search of a goal.

Moving to the middle session, the Thunderbirds struck first off a face-off win that went back to Mason Chitaroni at the point, who fed it over to Michael Beltrano on the right side and saw him send a shot through a crowd in front that eluded Gennaro at 2:55.

Pressing for the equalizer, Metivier remained solid stopping Hearst’s Zachary Demers off a one-timer from the slot prior to the half-way mark of the proceedings.

The visitors did eventually tie it at 14:24 as Jaxson Holmes sent a wrist shot from just inside the blueline that landed near the crease where a Soo defender inadvertently put one in his own net.

However, the Thunderbirds came right back to regain the lead 35 seconds later as they picked off a clearing attempt and saw Youssef Chaouachi rip one short side to put the hosts back on top.

Hearst, who led the league during the regular season in power play proficiency, struck while up a skater before the stanza came to a close to make it 2-2 after two.

That came about when Raphael Lajeunesse lifted in a backhand from the left circle at 18:05.

After a scoreless third, the two sides went to extra time to determine a NOJHL champion.

In OT, Soo defenceman Andrew Gibson drove hard into the Lumberjacks’ zone where he sent a pass in front from the left corner, right to a waiting Santa Maria, who promptly buried the decider, from point blank range, past a sprawled Gennaro to end it.

The Thunderbirds will now begin play at the Centennial Cup in Saskatchewan next Thursday as they meet the Flin Flon Bombers (SJHL) at 6 p.m. ET.