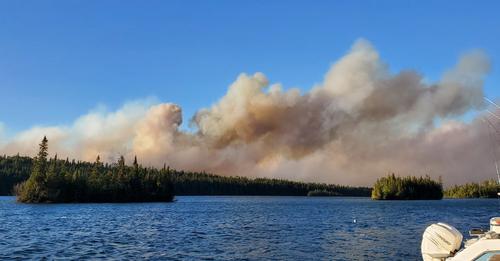 ISLE ROYAL, Mich. (AP) — A wildfire that’s burned about 200 acres on Michigan’s remote Isle Royale has prompted the National Park Service to close some trails and campground areas on the wilderness island.

The park service said Sunday on the Isle Royale National Park’s Facebook page that the closures were necessary “to maintain public health and safety” after the fire on the Lake Superior island’s east end expanded over the weekend amid lingering drought conditions. “Closed areas will be signed where possible and monitored to ensure compliance,” park staff said in the post.

The so-called Horne Fire was burning so intensely over the weekend on the island that it could be picked up by satellites, the National Weather Service in Marquette said. Planes were being used to ferry water over the fire in the hopes of extinguishing some of it.

Several trails and campgrounds on Isle Royale National Park are closed because of a fire on the island’s east end.

The fire status will be continually evaluated as conditions change. These closures will remain in place until rescinded.about:blank