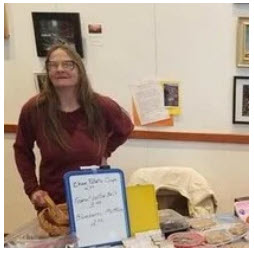 Laurie Lou Conklin, age 59, of Goetzville, Michigan passed away on January 20, 2021.She was born on August 12, 1961 to Edward Joseph and Lucille Molly (Ponik) Destrempe in Escanaba, Michigan.

Laurie was raised in Escanaba and graduated from Escanaba High School. After graduation, she joined the carnival. While working with the carnival, she met the love of her life, Donald Conklin. They married on July 20, 2008 in Gladstone, Michigan.

Laurie loved and had a passion for things in the kitchen. She and Don enjoyed selling their wares as vendors at the Les Cheneaux Farmers & Artisans Market held weekly at the Old School House in Hessel. They were originally invited to the market when the market heard they were selling berries. With berries as a start, Laurie started to bring items she created in her kitchen and flourished in the market community. She was most well known for her chocolate covered seafoam and jams. Laurie truly embraced the market and committed herself to being there every week with Don’s full support.

Laurie was preceded in death by her parents.

No Services are planned at this time.