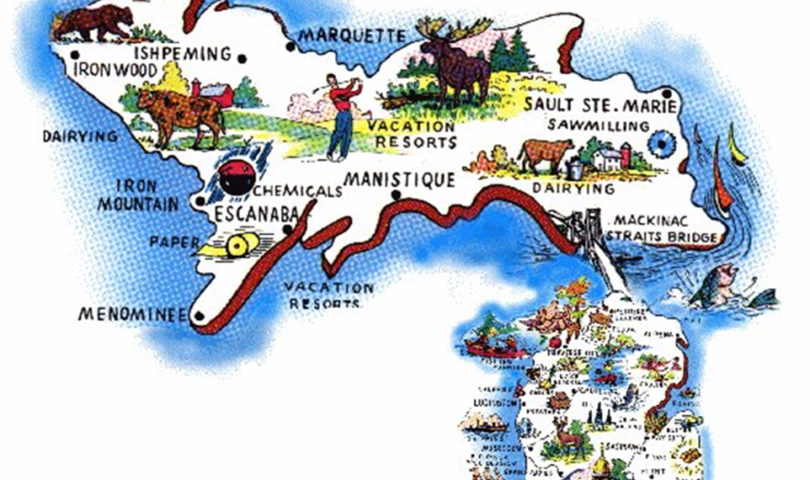 Yooper.   noun / Yoop·er / ‘yü-pər.   A native or resident of the Upper Peninsula of Michigan.  Used as a nickname.

Forged in the heavens above. Tempered to withstand all that life can throw at me with grace, dignity and strength. None are better equipped to endure the trials of life with boundless resolve…, for you see;

So, listen here friend, and find out what is contained in the pure essence of those who embrace the title of a True Yooper. You may learn a thing or two, or three or four.

Whether by birth within the jagged confines of our borders, or through personal choice to transplant here, the true-blue Yooper will always declare with a firm handshake and a twinkle in the eye;

I am a Yooper – therefore I am…

Mother Nature holds a special place in her heart for this spot of Terra Firma known as the U.P., Michigan’s Upper Peninsula. Carved by mighty glaciers so long ago. Covered with a canopy of trees. From birch to beech and from pines to oaks. Populated with the largest and hungriest swarms of blood sucking mosquitoes on Planet Earth. Home to wolves, eagles, seagulls, black bears, porcupines, white-tail deer, wolverines, badgers, beavers, and the mighty moose. Fish fill her lakes and rivers with salmon, pike, perch and the humble smelt… Holder of valuable minerals deep within her verdant soil.

Bordered on the north by the fresh water giant ‘Lake Superior’. Known to the native Ojibwe tribe as ‘Gitche Gumee’ and later in Henry Wadsworth Longfellow’s poem ‘Hiawatha’. This pristine, greatest of the five Great Lakes; is the final resting place for thousands of ships and crew who misjudged those early winter storms and sank to its bottom, never to feel the sun again.

We who call this rugged terrain home honor our role as stewards over all that nature provides. We may hug a tree, but we also harvest them for our fellow man, and are quick to plant two where one fell.

Some have asked, “Is there any humor to be found in a Yooper?”.
The answer is simple; Yooper humor stands as a category all its own.
Volumes have been printed and tall tales are still passed down from generation to generation around the campfire. Songs have been composed and movies produced – each of which put “a day in the life of a Yooper” on display for all to appreciate.

I am educated – I am a Yooper.

The education of a Yooper begins well before any official classroom surrounds body and mind. Nurturing of the young is highly respected. Among Yooper parents, and later, whether graduating from a one-room school house or university campus, a Yooper’s education excels in breadth, in depth, in facts, and in inquiry.

To the Yooper, education is less about filling a bucket, and more about lighting a flame.

I am a Yooper – therefore I eat ‘Pasties’.

Unique to the Yooper world of high cuisine and culinary delight sits the tasty and filling Pasty. A hearty and complete meal in itself, the Pasty has been a staple of the Yooper diet since the 1800’s when first introduced by Scandinavian and Cornish miners. These men spent their days underground in the iron ore and copper mines scattered throughout the U.P. Their daily lunchtime Pasty brought them both a comfort food and one packed with the essentials of meat, rutabagas, potatoes, and vegetables; all wrapped in a fine pastry outer crust.

A delicious meat pie, the hand-held Pasty, is often referred to as the ‘food of first choice’ by hunters, lumberjacks, miners, factory workers, Boy Scouts and tourists looking for their first unique eating experience while touring in the U.P. Nothing satisfies the taste buds and fills the stomach like a steaming fresh original U.P. Pasty laced with gravy or ketchup.

Sports and Yoopers are synonymous.

Yoopers all know that the best cure for wintertime ‘cabin fever’ and summertime ‘mosquito survival’ is to keep moving. Move. Move. Move. The faster the better. Hence bobsledding, snowshoeing, Nordic skiing, alpine skiing, ski jumping, snowmobiling, ice fishing (moving your pole
up and down while trying not to freeze to death), are some of the winter season sports of choice. Summer brings running, biking, hunting, sailing, more fishing, motorcycling, four-wheeling and horseshoes as summer season sports of choice. A few famous U.P. ski jumpers and Nordic skiers set records at past Olympics, which lead to the U.S. National Ski Hall of Fame
and the U.S. Olympic Training Site facility for Greco-Roman wrestling and cross-country skiing to be located in the heart of the U.P.

I am a Yooper – therefore I sit.

Don’t be fooled – Yoopers are also known as some of the best ‘sitters’ in the country. When a Yooper sits, he or she sits in a sauna, with beverage of choice in hand, sweats, and thinks. This routine of sauna/sitting/sweating/thinking has produced numerous valuable contributions to the human race. Many of these contributions are still classified as ‘TOP SECRET’, but in time may be de-classified and made available to the general public.

I am a Yooper – therefore I don’t brag.

We choose not to brag about the ‘celebrity factor’ that is part of our history – but we know about it… Ernest Hemingway had several favorite watering holes here. Cassius Clay before he became Muhammad Ali, had a private training facility here. The famous movie “Somewhere In Time” (Christopher Reeve and Jane Seymour) was filmed here on Mackinac Island at the Grand Hotel. Henry Ford and many wealthy auto industry barons of the early 1900’s built their private summer resorts on the shores of Lake Superior. The Huron Mountain Club remains today as an exclusive getaway for those with a golden ticket. Film stars James Stewart and George C. Scott held leading roles in the court room thriller ‘Anatomy of a Murder’, filmed in Marquette. Gordon Lightfoot’s ballad “The Wreck of the Edmund Fitzgerald’ puts to music the tragic story of the sinking of the largest iron ore boat to ever cross Lake Superior in its day. Loaded with tons of iron ore pellets headed for the mills and auto plants in Detroit, the Fitzgerald and all twenty-nine of her doomed sailors lost their lives in a brutal early winter storm that took them and their ship to a watery graveyard never to be recovered.

I am a Yooper – therefore I am a slave to fashion.

The Yooper dress code – and definitive fashion statement – is lumberjack red flannel plaid. Plaid is the universal attire for the true Yooper. We feel in touch with the universe and our inner self when dressed in plaid. Our Yin & Yang are in perfect balanced harmony when we are draped in plaid. Plaid is always in style in the U.P. When wearing it even the visiting tourist admits to feelings of being one with the universe. We simply call it that ‘Zen Plaid State of Mind’.

I am a Yooper – therefore I bleed Red, White and Blue.

Patriotic to the core principles of unalienable rights, freedom, personal responsibility and our country’s founding documents; that’s a Yooper’s Creed. We are the living, walking definition of Rugged Individualism. Our blood has been spilt on foreign soil defending those in need and protecting human freedom. We don’t look for a fight with anyone – but if a fight comes to us, we will end it with force and strength. A Yooper values peace and respects law. We defend the weak and helpless. A Yooper stands for good and believes that peace is patriotic.

I am a Yooper – therefore I do not run.

I stand tall with shoulders squared, head held high and hand extended in friendship. You can depend on me when help is needed. I do not run away. Evil runs from me and love is embraced. I am a friend to nature. I practice honorable stewardship over those I am accountable to. This is job #1 for me.

I work hard. I play hard. I eat well – as long as a Pasty is on my plate. I am a slave to fashion, as long as it is red plaid. My muscles are tough from swatting hordes of mosquitoes and paddling my canoe. I think that shoveling snow should be an Olympic sport.

So, there you have it my friend – the pure essence of a True – Blue Yooper. Whatever the dictionary may say about us, whatever the world may think of us, however we are viewed by ‘non-Yoopers, or how our unique quirks may set us apart, we are, and shall always remain, proud to claim with enthusiasm and declare with passion:

Daniel Bolz is the oldest of five Yooper siblings parented by Richard and Venetia Bolz. Both parents were Yooper transplants; Richard from Cleveland and Venetia from the Flint area. Richard, a forester by education and a highly skilled avid outdoorsman, and Venetia, a teacher, performer, singer, pianist, playwright and story teller extraordinaire. The family lived in several U.P. cities including Marquette, Sault Ste. Marie, Humbolt and Ishpeming.

Bolz, a third generation Army veteran, inventor, writer and dedicated auto and motorcycle enthusiast, can be found on his website AutoTipGuru.com where he writes a monthly article for car drivers of all ages. Bolz is a 1970 Marquette Senior High School graduate and attended NMU for two years. He later graduated with a BA in Political Science and Art from BYU. As a graduate student he earned an M.Ed. from BYU and an MBA from the University of Phoenix.

Daniel and his wife Ingrid (an NMU alumni, graduate degree in Music) raised four daughters, each of whom are proud to know they have a strong Yooper heritage and Yooper blood running through their veins.