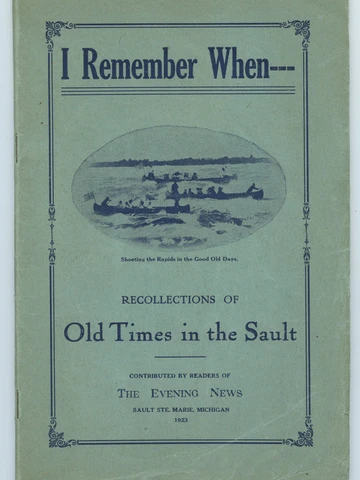 November 1, 1887, I came to the Soo from Milwaukee with Chase S. Osborn to take a position as superintendent of the printing department of the Sault Ste Marie News, of which Mr. Osborn, Melvin A. Hoyt, and Sandy Dingwall were publishers. We landed at Soo Junction at 2 a.m. – waited eight hours for a train and finally reached the Soo at 2 p.m. On our arrival here, we got a big square meal as soon as possible, as we had had nothing to eat except a few sandwiches since supper time the day before. The news office at that time was located in a two-story frame building on Water Street near the government park. The building was one of the few that did not go up in smoke during the disastrous fire in 1896. The building was condemned and razed about 4 years ago. – Norman L. Martin 318 Court Street

I remember when in the fall of 1860, Capt. John Spaulding, Master of the steamer, Northern Light, brought the news of Abe Lincoln’s election to the Sault. – George Hopkins 720 Ashmun St.

In 1878 Frank and Duke Trempe, George Blank, Fred Roach, and George Larke all came to school at the old high school building on Portage Avenue. They were all bright kids then, and now they are all good men.  – E.J. Wiley  424 Portage avenue

I remember when the ferry boat was named Antelope and Captain Charles Ripley was in command. It could only carry five or six passengers. – Jacob Dean

I remember when there was a stone building where the courthouse now stands. This building was called a castle then. It was an old landmark when I came to the Soo, but no one lived in it. It was almost hidden from view by the grove surrounding it. Back of this building was the village garbage grounds. Small and large animals were left there until they were eaten by the crows. – Mrs. B.J. McKerchie 302 Easterday Avenue

I arrived in the Soo, June 17, 1884. The oldest inhabitant was a government mule which used to police the fort grounds. When the first note for Reveille was sounded the mule went to the barn to be unhitched. No overtime for him. He went and a whole company couldn’t stop him. Water Street was the center of the town then. There were six places to get a drink and one to eat. Hicker’s machine shop was at the west end of Water Street. The stone wall is still standing – now used by the U.S. Government.  It was once used by the city as a jail. Then the jail was moved from there to the present park school grounds. If one got too drunk, they lodged him in jail. When he was sober, he would either crawl through the cracks of the jail or knock a board off and go home. – L.H. Conley, 402 Easterday Avenue