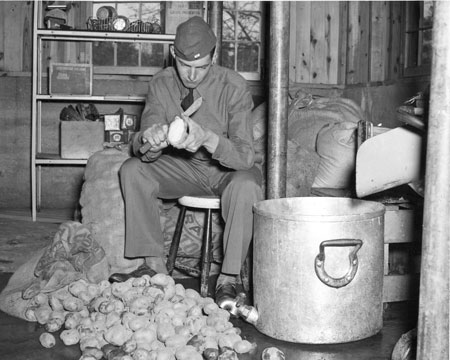 I am going to be on k.p. tomorrow, so I thought I would drop you a few lines tonight. Do you know that watch that I was telling you that I bought? Well, it wouldn’t run very well, so I got it exchanged, and the next one that I got only ran for 8 minutes, so I went back again. Well, he couldn’t find what was wrong with it, so he gave me a different one, and the one that I have now is keeping darn good time.

Things have been awfully quiet around here. Tonight at supper we had nice large slices of watermelon, and that sure hit the spot.

I met a young paratrooper, who is in my barracks, who is from Iron Mountain, Michigan. His name is Scott, and we get along pretty good. He had a fight with a guy tonight, and the guy slashed his fingers with a razor. He gave him a beating though.

Well, it is quite late, and I have to be up early tomorrow morning. I hope this letter finds you all well, as I am the same.

Goodnight and bye for now,