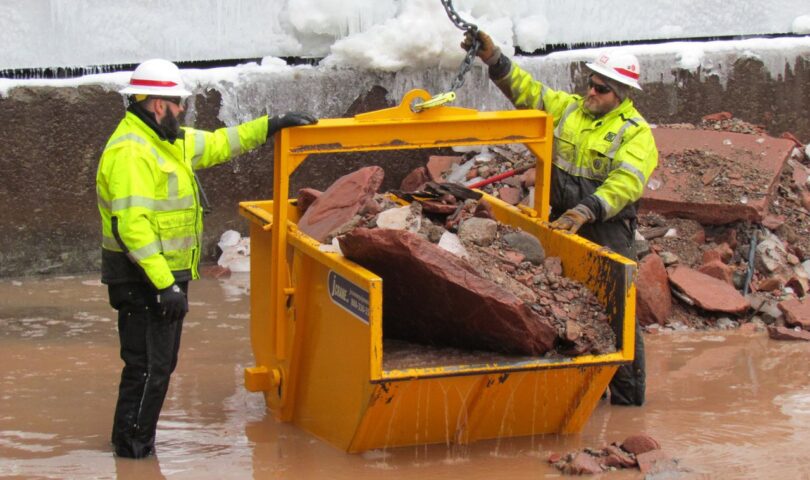 When the Poe Lock – the system’s largest lock – shut down in late January, the huge area was emptied of all its water so inspections could be done and repairs could be made. But dewatering the lock also revealed what a season of heavy shipping traffic had left behind: 600,000 pounds of debris that has to be cleared away.

So what is all this debris? There’s sand, sediment, dead fish – and a lot of rock. Much of it is the large, flat red Jacobsville sandstone that is native to the northern Upper Peninsula and is under much of Lake Superior. The bottom of the lock also revealed a collection of bolts, pieces of rebar, and tools that had been accidentally dropped into the water by topside work crews during the shipping season.

“Some of it is carried in through the natural currents that occur when we fill and empty the lock,” Jeff Harrington, the Soo area office chief of operations, said of the debris. “The bulk of it is blown in or pulled in with propeller wash from the vessels.”

The U.S. Army Corps of Engineers’ Detroit District posted photos of the clean-up recently on its Facebook page, showing crews busy clearing huge pieces of rock and other debris from the lower fore bay of the Poe Lock. “So far about 600,000 pounds of debris has been lifted out, some of it cleared a shovelful at a time,” officials said.

One photo shows workers prepping a skip – a large bucket with a door at the bottom for emptying the debris – with a load of rocks. Once filled, the skip is lifted by a crane. “The skip has a capacity of just over 6,000 pounds and the team completed about 100 lifts,” the Army Corps said.

“Those activities will take us right through the non-navigation season,” Harrington said.

The Soo Locks are set to reopen on March 25. The engineering system in the St. Marys River is designed to move ships and cargo between Lake Superior and the lower level of Lake Huron. It’s the only way ships can travel between the upper and lower Great Lakes.

Only two of the lock system’s four locks are in use. The Poe Lock is the largest, and the only lock long enough to accommodate the 1,000-foot freighters. It takes about 22 million gallons of water to raise the level of the Poe Lock by 21 feet when a big ship comes through, the Army Corps said.

Each year, the locks handle more than 4,500 vessels carrying up to 80 million tons of cargo. Iron ore, limestone and coal make up the bulk of what is coming through on the big freighters.

While prep work is ready to begin on a new lock, the Corps has said it’s imperative to keep the two frequently-used locks in good repair. The Poe Lock is 1,200 feet long, while the smaller MacArthur Lock is 800 feet long.