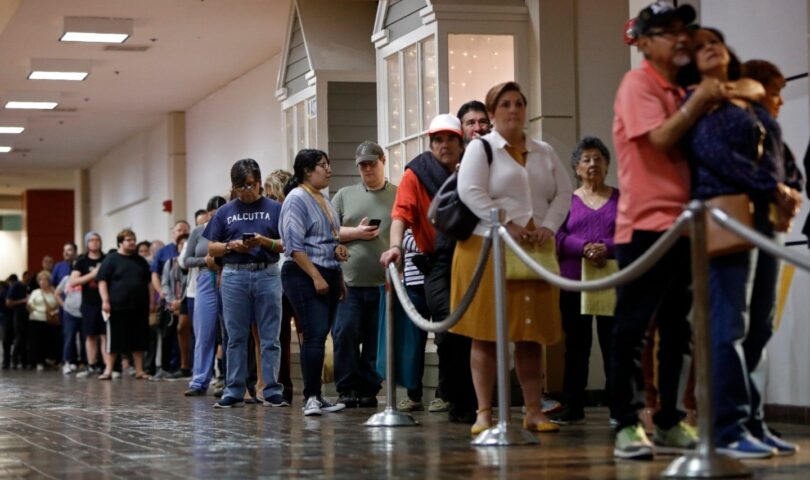 The nation will watch Tuesday to see whether Bernie Sanders can mount a comeback by winning the Democratic primary in Michigan, a crucial swing state.

Buckle in for a long wait.

Results will come later than usual, as local clerks juggle a surge in absentee ballots, Secretary of State Jocelyn Benson told reporters Thursday. Absentee ballot requests are up 80 percent from 2016.

Municipal clerks have called for the Legislature to make changes that would allow them to process ballots more quickly, but bills to implement changes haven’t moved.

“It’s amazing it’s been such a hard lift to communicate that effectively, but I am hopeful that Tuesday will show even more why that additional time is necessary,” Benson said.

Benson didn’t estimate when results would be available, but her predecessor, Ruth Johnson, now a state senator, has warned the counts could last until Wednesday in some areas because of absentee ballots.

At stake Tuesday: 125 delegates for the Democrats, which has essentially become a two-person race in the past week between Sanders, the Vermont senator, and former Vice President Joe Biden. (Hawaii Rep. Tulsi Gabbard is still in the race, but doesn’t have a path to the nomination.)

Biden won big on Super Tuesday and has racked up a series of high-profile endorsements from Democrats including Gov. Gretchen Whitmer.

National pundits say Michigan is huge: If Biden wins, he could all but finish Sanders, according to Politico, while a win by Sanders could reset the race as a toss-up.

Only Trump and Weld remain in the race, and Weld is not expected to pose a challenge.

Here are some common questions about the election:

Can I change my vote?

Fourteen Democrats who are no longer running for president will appear on Democratic primary ballots.

Because of voting reforms passed in 2018 that allow no-reason absentee voting, more than 572,000 state voters have already cast ballots.

Michigan law allows those who’ve already voted absentee to spoil ballots and cast a new one. So far, nearly 16,000 people have done so, according to the Michigan Department of State.

To change absentee votes, send a written, signed request to your local clerk for them to spoil your ballot and send you a new one in the mail. Your request must get there before 2 p.m. Saturday. If you want to vote at the polls instead, say so in your letter to the clerk.

You can also tell your clerk to spoil your ballot in person until 4 p.m. Monday, the day before the election. While you’re there, you can get a new absentee ballot or tell your clerk you’ll vote at the polls.

However, it’s too late to change your absentee vote on Election Day.

When are polls open?

7 a.m. to 8 p.m. on Tuesday. Enter your information here to find your polling place.

Can I vote for both Republicans and Democrats?

When you arrive at the polls or request an absentee ballot, you must indicate your party preference in writing before you receive a ballot. It will show only the candidates for that party.

Is the presidential race all that’s on the ballot?

In many places, yes. But voters statewide also will decide at least 245 ballot proposals, including a 0.2-mill, 10-year renewal of a tax to support the Detroit Institute of Arts in Wayne, Oakland and Macomb counties.

Statewide, at least 220 of the proposals ask voters to raise taxes or continue assessments for services such as road repairs, public safety and school building maintenance.

How are delegates awarded?

Democrats can win Michigan delegates by securing at least 15 percent of the vote across the state or in individual congressional districts.

Democratic delegates are awarded proportionally based on the number of votes each candidate receives statewide and in each congressional district.

The Michigan Democratic Party has 147 delegates to send to the national convention in July: 125 are awarded based on primary results, while 22 are superdelegates based on their positions within the party, such as elected officials and party leaders.

In a massive upset, Bernie Sanders beat Hillary Clinton in Michigan’s Democratic primary in 2016 by less than 2 percentage points.

Trump beat the other Republican presidential candidates in 2016 to win most of Michigan. Texas Sen. Ted Cruz won most counties in west Michigan, but still lost to Trump by more than 10 percentage points.

While often viewed as a bellwether state, Michigan primary results are often surprising.

Besides Sanders, the state went with Clinton in 2008 over Barack Obama, John McCain over George W. Bush in 2000 and awarded 14 of 30 Republican delegates in 2012 to former Sen. Rick Santorum in his race against eventual nominee Mitt Romney.