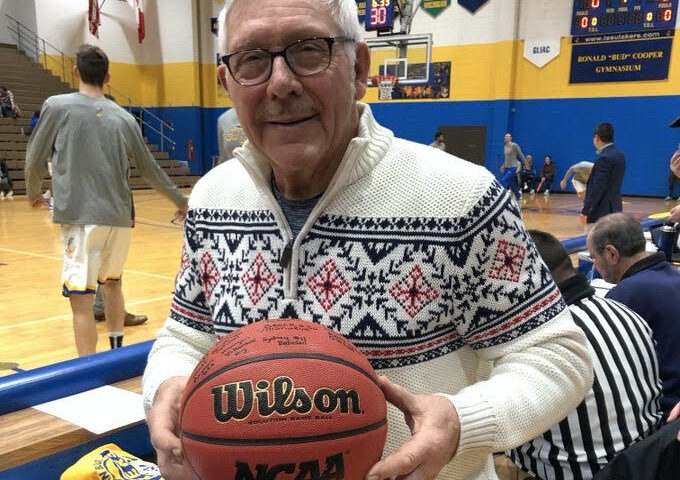 Public address announcer Dave Gonyeau, clock operator John Askwith and shot clock operator Ben Jones have worked together for over 20 years. The late LSSU hall of famer Jim Cooper kept the book for many decades until poor health forced him to retire, and Jones replaced Joe Poisson on the shot clock 23 years ago. Askwith, who has worked the table at LSSU since he was a teenager, is at about 1,000 games and counting.

“I never missed a game,” noted Gonyeau, who will end his 39-year run with LSSU Saturday after the Lakers’ regular-season finale against Michigan Tech. “I loved it. It was a wonderful run, and I enjoyed it.

Gonyeau announced St. Ignace and Sault High football and basketball during his teaching and Sault Area Schools administrative days, and also the Hiawatha Skating Club’s annual show. He has seen in-bounds plays replace jump balls in basketball, and the addition of the shot clock and three-pointer. His respect for game officials is immense as the game has evolved.

“It’s faster for both the men and women,” Gonyeau said. “No ifs, ands or buts. Anyone in the stands screaming at the refs has never been on the floor blowing the whistle.”

While the coaches focus on their players and the officials toil as a unit, the LSSU scorers table provides support while working as its own team.

“It really is a team when you look at the table,” Jones said. “There are four people doing individual things, but we are all connected to the ball game and score. We have to rely on each other. There’s always a conversation going on. Who took the shot, was it a 2 or 3, how many timeouts, who had the foul. In my case, did the ball hit the rim?…We pretty much rely on the officials. They’re the ones calling the shots. But Dave has to broadcast all that to the fans.”

Gonyeau never wavered when saying the highlight of his announcing career has been watching young players develop and mature during their careers – especially those who have local roots.

“The highlight was when the Lady Lakers ruled the roost,” Gonyeau said. “I remember introducing a starting lineup of all St. Ignace and Sault girls, and they were dominating the league. Watching a player like Alice Deusing, and a lot of other young players who were so good. Erica Ledy, Gwen Wilkie, Brandon Miller, Chris Nance. It was fun to see local kids doing well. Kris Bullock – I watched her in high school, then college, then she came back to coach. She was an outstanding player and probably our most-successful coach.”

Gonyeau added his own flare to the game – “Three by Ronlea!” Or, “Three by Akemji!” He wasn’t shy about going off script.

“Instead of double zero he always says ‘double ought’ – the shotgun angle,” Jones laughed. “He has his own style.”

“You know I’m a loose cannon,” Gonyeau joked. “I like to do that and have fun, and we did.”