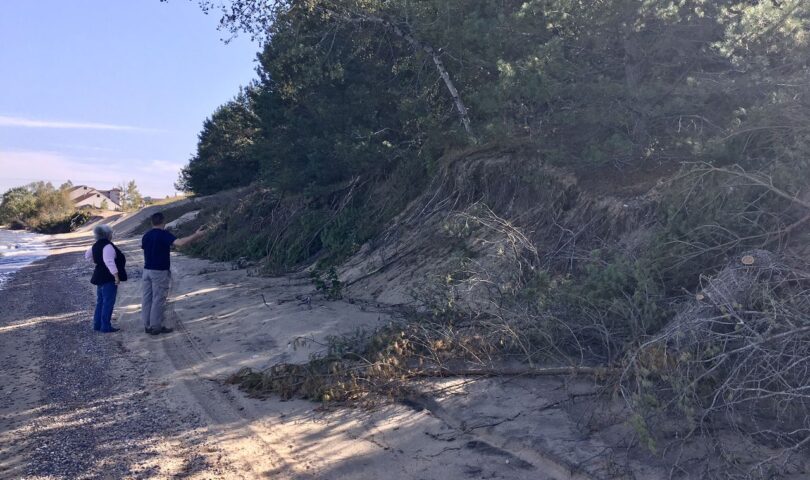 BRIMLEY, MI (MLIVE.com) — In June of 1662, hundreds of invading Native Americans from the Iroquois nation were killed on the shore of Lake Superior by local Chippewa defending their land from a war party looking to monopolize fur trading routes in the Great Lakes region.

The Battle of Iroquois Point is a pivotal moment in the Bay Mills Indian Community history that helped stabilize the fur trade around Sault Ste. Marie and the Straits of Mackinac.

Now, 357 years later, the burial site of local natives killed in that battle is being threatened by an eroding shoreline fueled by the rising water levels of Lake Superior.

At the request of Bay Mills tribal leaders, the U.S. Army Corps of Engineers is studying how to protect the shoreline near the historic graveyard under a tribal partnership program that waives the cost of federal project analysis and design work. The work received $45,000 in President Donald Trump’s 2021 fiscal year budget.

“It’s really starting to wash out with the water being so high this year,” Carrick said. “With the waves — and it’s always windy here — its hitting where the burials are and it’s kind of getting scary. I keep going to check to make sure nothing is coming out.”

The graveyard is located along West Lakeshore Drive just east of the Bay Mills Community College campus. The burial site is separated from the beach by a 20-foot bluff. Carrick said concern about erosion began to grow in 2017 as the lake started to eat at the shoreline.

Carrick said local Chippewa (also called Ojibwe) were buried in a mass grave on site after the Point Iroquois battle. The graves were confirmed by ground-penetrating radar in 1997. The graveyard was tended by Methodist missionaries in the 1800s. The most recent burials date to the 1950s. Carrick said three original band chiefs are believed to be buried there.

The site was closed to the public to prevent looting, she said.

Ground radar showed burials outside the fence line, Carrick said. She estimated some graves may only be 30 feet from the water. Some are shallow burials, around three feet deep.

The Army Corp got involved last February. In December, the project was cited in a letter sent to the Army Corps and White House by Michigan’s two Democrat U.S. Senators, Debbie Stabenow and Gary Peters, who were pressing for funding to address high water concerns across the Great Lakes.

The graveyard’s location along the shoreline where the St. Mary’s River transitions to Lake Superior’s Whitefish Bay, adds hydraulic complexity to the study, he said.

Chrumka expects to present recommended options for protecting the bluff from erosion sometime after October. At that point, the tribe can hire a private contractor or request the Army Corps complete the work, he said.

The tribe could seek more expedient measures to protect the bluff. The state of Michigan is currently expediting permits for seawalls, rock armor and other shoreline erosion protection work due to peaking water levels across the Great Lakes.

“By no means do they have to go through the Army Corps if they wanted to hire a general contractor and construct something with a permit,” Chrumka said.