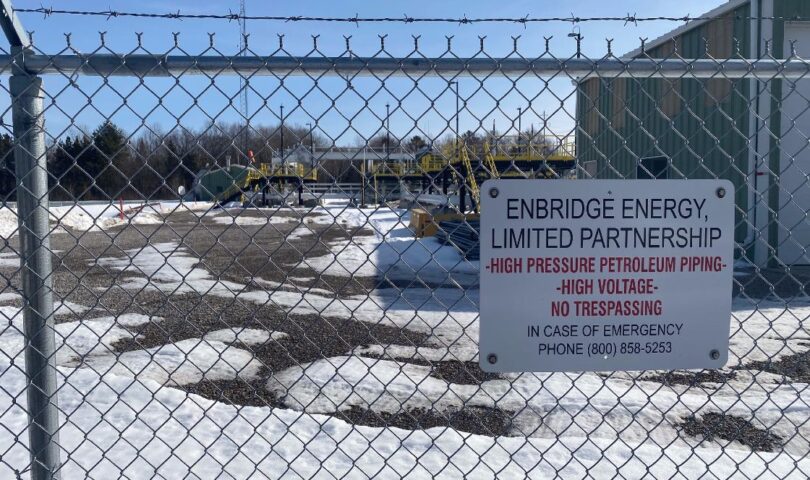 WAWATAM TOWNSHIP—As court battles persist over Enbridge Energy Inc.’s plan to build an underground tunnel for its Line 5 oil pipeline, Enbridge is quietly shelling out millions for modest properties on the south shore of the Straits of Mackinac.

According to local property records, an Enbridge subsidiary has scooped up 16 residential parcels since November 2018 in a township west of the Mackinac Bridge, apparently betting it will survive legal challenges to its tunnel plan.

The most recent purchase by the subsidiary, Tri-State Holdings, was on Jan. 17 for a pair of residential parcels in Wawatam Township that sold for more than $1 million, according to township records. That’s many times what local records show as their market value of roughly $280,000.

Wawatam Township Supervisor Roger Moore noted that the parcels are where preliminary Enbridge plans show the tunnel would emerge from the Straits and link with the company’s underground pipeline that continues on a southeast path through lower Michigan to Sarnia, Ontario.

It’s critical land as the Canadian energy company seeks to replace 67-year-old, dual pipelines that currently rest on the bottom of the Straits. “I think that’s why they paid so much for that property,” Moore told Bridge Magazine.

This now-deserted residential neighborhood is dotted here and there by yellow no-trespassing signs that mark the Enbridge purchases, just a few hundred feet from an Enbridge Line 5 pumping station.

Tri-State’s January buys came three days after a Michigan Court of Appeals panel ruled Enbridge could proceed with the tunnel project. That thwarted, at least for now, Michigan Attorney General Dana Nessel’s attempt to block tunnel construction while the state contests a 2018 law that paved the way for the tunnel project, which is estimated to cost Enbridge $500 million.

Enbridge spokesman Ryan Duffy confirmed the land purchases in a statement to Bridge Magazine, adding that Enbridge is “committed to starting construction [on the tunnel] in 2021 and finishing the project in 2024.”

“Right now we are focused on the hiring of our design and construction contractors for the project,” he said, “and we will soon be filing with the state for additional permits.”

He declined to comment on the money Enbridge paid for the township parcels. Bridge was unable to reach the former owners of the most expensive parcels.

Duffy said that as the tunnel design continues, no exact location had been set for where the tunnel would emerge on the southern shore of the Straits.

While the proposed tunnel remains a bullseye for opposition among many state residents, Democratic elected officials and environmental groups, it may be less so for locals. This tourist-heavy area can resemble a ghost town in the winter. Around here, Enbridge property taxes help pay the bills.

Moore calculated that in Wawatam Township alone in 2020, Enbridge tax revenue will supply $67,500 of the township’s roughly $300,000 budget.

“Without that,” he said, “we would probably have no fire service. Our roads would go to heck.”

A 2018 poll of likely Michigan voters commissioned by the National Wildlife Federation found that 58 percent supported the concept of a Line 5 tunnel, but those views turned negative when voters were told the existing pipelines would remain open during tunnel construction. A 2019 survey by Michigan State University found that 44 percent of Michigan residents aware of the pipelines were extremely concerned about a potential oil spill.

But local sentiment was sanguine in recent Bridge Magazine interviews around the area.

At the Keyhole Bar in Mackinaw City — which is partly in Wawatam Township — waitress Laurie Navidzadeh tended to a trio of out-of-town visitors on a slow Tuesday. She said she had no misgivings about Enbridge moving forward with its tunnel plans.

“I’m all for it. In the long run you have to protect the Great Lakes and the tunnel will do that, so we might as well move on.”

“I think the tunnel will definitely be good safety against leakage. I think they’ve been doing a lot more checking on the pipeline.”

Anderson said there’s been more talk lately around town about the opening of a nearby casino than Line 5.

“The people here really don’t seem to be talking about the pipeline,” she said.

In the meantime, Nessel continues to try to shut Line 5 in a separate Ingham County Circuit suit that calls the pipelines “a continuing threat of grave harm” to the Great Lakes.” The suit seeks to void a 1953 easement that allows Enbridge to run the pipelines across state-controlled bottomlands in the Straits. A hearing on a state motion asking the court to decide the case in its favor before trial is set for May 22.

About 10 miles southeast of Mackinaw City, just outside Cheboygan, Vince Lumetta has been calling for Line 5 shutdown for years, as have an array of environmental groups including the Michigan Chapter of the Sierra Club and Clean Water Action, a Washington, D.C.-based environmental advocacy group.

(Democratic presidential hopefuls Bernie Sanders and Elizabeth Warren — along with now-former candidate Pete Buttigieg — added their own call to shut down Line 5.)

“To be honest, I don’t have a very high opinion of Enbridge,” Lumetta told Bridge.

He owns a cottage on Lake Huron about three miles from the Mackinac Bridge. In his mind, that would make it ground zero in the worst-case scenario of a Line 5 Straits spill.

“It would not only be my property but all of northern Michigan. It would be devastating.”

He added: “I’m not sure if the tunnel will ever come to fruition. I think it may be a smokescreen, so they can continue to pump Line 5 the way it is.”

But neither skeptics nor ongoing litigation has deterred Enbridge as the company moves forward with the tunnel project.

In July, Enbridge embarked on $40 million in engineering and geological preparations for the tunnel. That included a drilling vessel geared to take bedrock samples beneath the deepest stretches of the Straits.

Guy Jarvis, Enbridge’s executive vice president of liquids pipelines, said the vessel’s work was “tangible evidence” of the company’s commitment to move forward on the tunnel “in the face of the state’s attempts to invalidate prior agreements and shut down the pipeline.”

Enbridge plans to base tunnel construction operation on the north side of the Straits, on a few dozen acres of land it owns west of St. Ignace.

The proposed tunnel has been a lightning rod for controversy since former GOP Gov. Rick Snyder announced in October 2018 that Enbridge had agreed to pay for construction of the nearly four-mile tunnel under the Straits that would house a replacement for the dual pipelines that run along the lakebed.

The tunnel would run parallel to the existing line, from the company’s North Straits Station on Point La Barbe in the Upper Peninsula to its Mackinaw Station west of Mackinaw City.

The single replacement pipeline would run through a 12-foot-diameter walled concrete tunnel bored 100 feet into the bedrock below the Straits. The design, Enbridge has said, will reduce the likelihood of a spill to “virtually zero.”

Under the deal, Enbridge would continue to pump oil and liquid natural gas through the twin lakebed pipelines until the tunnel is complete.

Demands to shut down Line 5 were sparked by a massive 2010 Enbridge spill involving another pipeline in  the Kalamazoo River near Marshall. That disaster fouled 38 miles of the river, a tributary creek and surrounding wetlands. Over a period of 17 hours, a six-foot gash in the pipeline dumped more than 1.1 million gallons of oil.

Enbridge’s pipeline monitoring systems had failed to detect the Kalamazoo spill. It was discovered only after area residents called 911 to report the smell of oil.

Environmentalists say they fear a Line 5 spill into the Straits, which connect Lake Michigan to Lake Huron, could be worse.

In 2018, Michigan Technological University issued a 396-page report that said in a worst-case scenario a Line 5 spill would gush more than 2.4 million gallons of oil into the Straits, foul over 400 miles of Great Lakes shoreline and cost $1.86 billion in damages. Such a spill also would endanger 47 wildlife species and 60,000 acres of habitat, the report said.

The same year, a six-ton anchor on a barge and tugboat dragging along the bottom of the Straits struck Line 5, denting the pipelines and slicing another company’s three underwater power cables, causing $100 million in damage to the cables and releasing 800 gallons of mineral oil into the Straits.

Enbridge said in a statement at the time the pipelines remained safe and intact.

“A review of all leak detection systems and available data indicates the structural integrity of the pipelines has not been compromised,” it stated.

Those controversies aside, Moore, the township supervisor, said Enbridge tax revenue is a lifeblood not only for the township, but for the local school district and everything from area ambulance and senior citizen services to the Emmet County general fund. He calculated the company’s anticipated 2020 tax payments from its township property at just under $1 million.

Moore said Enbridge township property — excluding the Tri-State Holdings purchases — is tentatively taxed at about $26 million. That includes its pumping station, the value of its underground pipes and equipment in the township, and its pipelines halfway across the straits.

“If we were to lose $360,000 of revenue, we would be in a very difficult situation with very difficult decisions ahead,” Superintendent Jeffrey Curth told Bridge.

“We would be under some drastic budget constraints.”