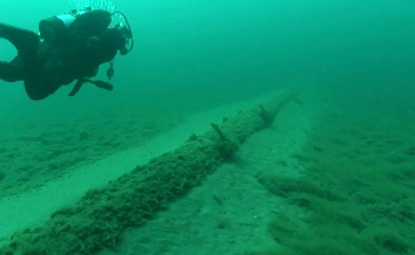 An Ingham County judge on Thursday ordered Enbridge to shut down its Line 5 pipelines at the bottom of the Straits of Mackinac pending the outcome of a hearing to be held next Tuesday.

Attorney General Dana Nessel had filed a request for a temporary restraining order against Enbridge’s operation of one of the two 67-year-old pipelines after reporting significant damage to the other pipeline to the state last week.

“Enbridge has failed to provide the state with information about the cause of this significant development involving Line 5, and so I’m very grateful for the court’s decision today,” Nessel said. “While the fact that Enbridge reactivated one of the lines before consulting with the state is concerning, the fact that the company has failed to disclose the cause of this damage is equally alarming.”

Nessel said the ruling, however, “is only a short-term fix” and that eventually the pipeline needs to be shut down permanently and removed

Gov. Gretchen Whitmer and others had complained that neither the western nor eastern pipeline should be used until after the cause and extent of the damage to an anchor support on the eastern pipeline was assessed and understood. Enbridge’s Line 5 has been criticized sharply as a potential environmental risk to the Great Lakes over the last decade.

The company has maintained that the crude oil and liquid natural gas pipelines are properly maintained and safe.

Enbridge did not immediately respond to the order issued Thursday by Ingham County Circuit Judge James Jamo, which ordered the company to cease all operations on Line 5 through the Straits of Mackinac and disclose any relevant information related to the recent damage as part of an injunction Nessel seeks against the company to determine if the pipelines are safe.

Last Thursday, Enbridge reported the damage and its shutdown of both pipelines as a safety measure. A day later, Whitmer asked the company to provide state regulators with all the information it had regarding the damage. Enbridge, however, reactivated the western pipeline – saying it had determined it was safe to do so without discussing it with state officials – while leaving the eastern pipeline shut down.

“Enbridge’s decision to continue pumping crude oil through the Straits of Mackinac with so many unanswered questions was reckless and unacceptable,” Brown said. “Enbridge owes a duty to the people of Michigan and must answer to the state for how it treats our Great Lakes. The governor will continue working to keep our water safe.”

The National Wildlife Foundation also applauded the move, with its Great Lakes regional director, Mike Shriberg, calling it a “major victory” and saying Line 5 is “long past its useful life and should have never been in this location.”

Jamo ordered the west line be shut down within a day of Enbridge receiving his order. “The risk of harm to the Great Lakes and various communities and business that rely on the Great Lakes would not only be substantial but also in some respects irreparable (if one of the pipelines suffered a failure),” he said.

On Wednesday, Democratic members of Michigan’s congressional delegation asked the Trump administration to order Enbridge to shut down the line while the damage was assessed.