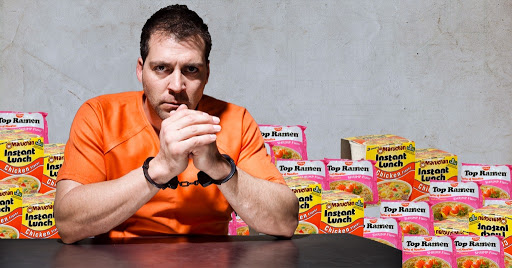 LANSING – After running rampant through the housing units of many Michigan prisons, the coronavirus is now impacting prison food.

The supply of ramen — a staple many prisoners purchase from the commissary to supplement what they are served in the chow hall — has been sharply reduced by a COVID-19 infection that shut down a manufacturing plant, Michigan Department of Corrections spokesman Chris Gautz confirmed Wednesday

Prisoners were told Wednesday the total number of ramen products they can buy from the commissary every two weeks will be cut in half, to 15, from 30 previously, Gautz said.

Prisoners were also told that “until the supplier has made a full recovery in production, there may be times when specific ramen products are out of stock,” according to an email obtained by the Free Press.

From January through May, Michigan prisoners purchased about 2.5 million packets of ramen, Gautz said. And ramen products were five of the top 10 items purchased from the prisoner store, he said.

In a prison setting, “that’s maybe the ideal food — you can do so much with a ramen noodle,” said EL-Alamin, executive director of the MADE (Money, Attitude, Direction, and Education) Institute.

Ramen is a key ingredient when prisoners pool items such as meat, vegetables and cheese to have a “cook-up” using prison microwaves, EL-Alamin said.

Gautz said he has not heard about ramen being used as currency, but confirmed that several varieties of ramen are among the most popular items purchased through the prison commissary, which is operated under contract by the Missouri-based Keefe Group.

Especially popular are “spicier varieties that they use when they make their own meals in their housing unit,” he said.

As of Thursday, 68 Michigan prisoners and two employees have died from COVID-19, according to the department.

With the help of the Michigan National Guard, the department recently completed the testing of all Michigan prisoners for COVID-19. As of Thursday morning, results had been reported for 38,130 tests and 3,983, or just over 10%, were positive.

Some prisons have much higher infection rates. At Parnall Correctional Facility near Jackson, for example, where 10 prisoners have died, 505 of the 1,567 tests have come back positive, or 32%.

Employee testing is not mandatory. The department says 372 employees have tested positive for COVID-19.

Though a May analysis by The Marshall Project found that the department ranked second nationally, behind only New Jersey, in COVID-19 prisoner deaths per capita, the department said in a news release last week it “was incredibly proactive and acted swiftly and effectively in minimizing the spread of COVID-19,” meeting or exceeding guidelines from the Centers for Disease Control and Prevention.

Among other concerns, employees have complained that the department did not halt classes and other programming quickly enough at many facilities.

EL-Alamin joined many other prisoner advocates in saying Gov. Gretchen Whitmer should have — and still should— use her clemency powers to release at-risk prisoners who pose no risk to the public, regardless of when their earliest release date is.